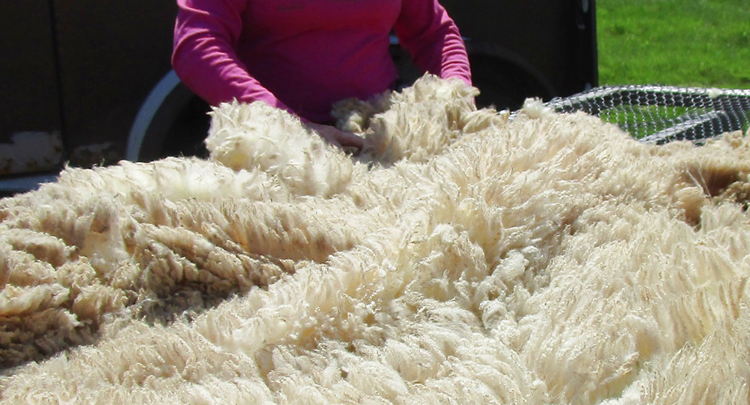 by
89 people viewed this event.

All the steps in one day!

You will have the chance to participate in many of the steps as we go from sheep to shawl in one day! Sheep are rounded up, then watch: shearing, cleaning and scouring, grading and sorting, carding, spinning, and knitting!

Our sheep to shawl demonstration is presented by local artisans and celebrates the prominence of wool in our history, especially as a factor in the self-sufficiency of our colonies. According to records, sheep were domesticated thousands of years ago. They were originally brought to the colonies by Columbus (1492). The colonists themselves brought the skills and knowledge to continue the hand processing of wool from their homelands.

In this event, sheep will be gathered and shorn, then the wool fleece will be cleaned, scoured, graded and sorted. The fleece will then be hand carded, hand spun, and then knitted into a finished product.

Rebels in the Home: Wool in America

The British Parliament levied several heavy taxes on the products that they sold to the colonists, including wine, coffee, and printed calico. As they became fed up with “taxation without representation,” the colonists revolted. Women decided to boycott the British fabric and replace it with their own handspun, knitted and woven garments.

With the revolt against the British, there was a move to disrupt the British monopoly on the textile market. A secret club of women, not afraid, even resorted to extra-legal means to end British tyranny. The Daughters of Liberty formed in secret and organized mass spinning bees in town squares, churches, and homes. The Daughters took pride in homestead self-sufficiency and brave rebellious acts against British taxation without representation. Together with the Sons of Liberty, they would go on to defeat the British and win independence for America.

The Museum is proud to present this hands-on look into the history and culture of New Hampshire farms and farm women.

All the steps in one day! Don’t miss this!