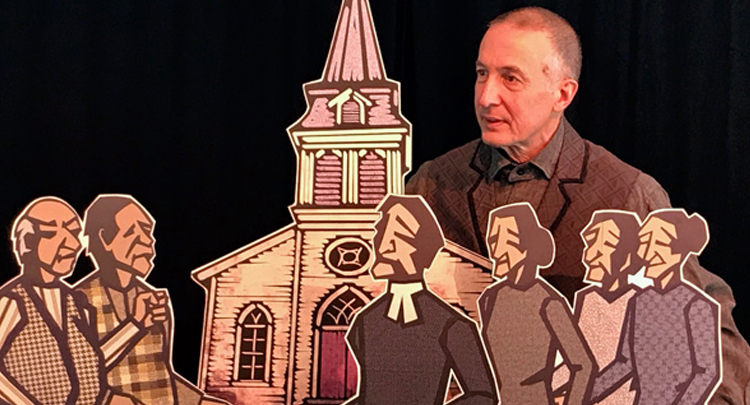 by
105 people viewed this event.

Pontine Theatre presents Tales of New England Life, the original stage adaptation of stories by New Hampshire author, Alice Brown. The tour of this production is funded by a grant from the Fuller Foundation. Pontine’s season is supported by a grant from the NH State Council on the Arts and the National Endowment for the Arts.

Pontine Co-Directors, Marguerite Mathews and Greg Gathers, have selected three of Ms. Brown’s evocative tales to bring to life on stage: Farmer Eli’s Vacation (1895), Gardener Jim (1910), and A Poetess in Spring (1910) Each story introduces a cast of colorful characters portrayed by Gathers and Mathews through storytelling and Toy Theatre figures created by Mr. Gathers.

Alice Brown was born in 1857 on a farm in Hampton Falls, a community that acted as a template for the villages depicted in her stories. She attended Robinson Female Seminary in Exeter, where she displayed a talent for writing at a young age. It was during her early years in Boston that Brown published her first novel Stratford by the Sea (1884), set in a small coastal community.

Brown’s rich descriptions and candid characters established her as a popular regional color writer. She was best known for her popular New England short stories. Collected into volumes, her Tales of New England Life portray the traditional simplicity and bounteous goodness of country life.

“Pontine Theatre is a small miracle. Mathews & Gathers conspire to fascinate the contemporary mind with original works based upon stories and literature of New England. There’s really nothing else like it anywhere.”
– NH Magazine

Pontine Theatre, based in Portsmouth NH, is a nationally known two-member ensemble, widely acclaimed for an extensive catalogue of innovative original plays that celebrate the history and literature of New England.

Tales of a New England Life